Wondering about the wedding speech order at your reception? Here’s everything you need to know!

The first person to speak at a wedding is usually the Master of Ceremonies or MC, as they’re more commonly known.

This is the person who guides the event along and ensures it proceeds with some flow. They also introduce each new speaker and hurry things along should they start dragging on.

Though there are plenty of professional MC’s around, many couples opt to have a genial friend or family member act as MC, a decision that will allow your big day to run more smoothly and, depending on the person you pick (or hire) to do they job, they can even inject some much needed levity and humour during the more serious or emotional moments of your wedding reception.

After the MC is introduced, the host/s of the wedding usually appear and thank everyone for coming.

Traditionally, these were the bride’s parents as they were always the ones who paid for the wedding, but in modern times it has become more common for this responsibility to be shouldered by both the the bride and groom’s families, or even solely by the couple being wed.

In any case, the hosts will usually speak for a few minutes. This is usually before dinner as you don’t want to be trying to hold the guests’ attentions while they’re enjoying the wedding spread – and your food will get cold, too!

After dinner is served, or the hosts have spoken, whichever occurs later, a toast to the bride and groom is usually offered, followed by the groom getting up to give his speech.

Once his speech is done, he’ll usually make a toast to the parents, his own groomsmen, the bridemaids and, of course, his lovely new wife.

Traditionally the bride doesn’t make a speech, but at many modern weddings she will. In fact, sometimes she’ll give the wedding speech and the groom won’t and, occasionally, so too will the bridesmaids.

After the groom sits back down, it’s time for the main event; the best man and/or maid of honour speeches.

While it is not traditional for the maid of honour to speak, in recent years it, too, has become a popular aspect of many wedding receptions. Sometimes the best man and the maid of honour will even give a joint speech, which is always fun.

These speeches are usually followed by a toast to the happy couple.

Father and mother of the bride/groom

After these speeches, the father and mother of the groom and/or the bride will, typically, speak. These speeches usually do not last too long and often express joy at the joining of their child with another person and the end of the parents responsibilities concerning the care of their son or daughter.

If there are any messages, well wishes, etc. the bride and groom or the best man will read them out during his/her turn before signing off with a few short closing remarks. Traditionally, telegrams from interstate or overseas were read out at this point. These days, it may be emails wishing the couple well from those who couldn’t make it.

At this point the speeches and the formal part of the reception is considered over, and the guests are free to hit the dance floor.

With your newfound knowledge of the procedure regarding wedding speeches, you might find yourself even volunteering to participate in the next wedding that comes up on your radar! But if public speaking is something that makes you tremble, this article might help. 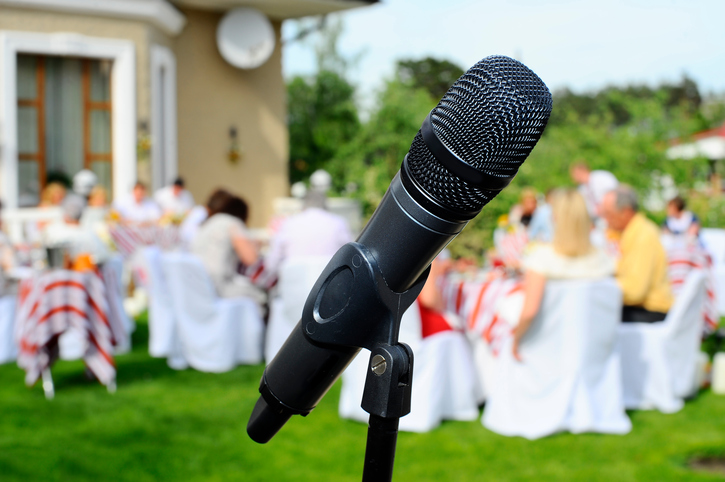