I guess only a seven-time world BMX champion could pull off a wedding day stunt like this one.

Legendary Canberra BMX racer, Leigh Darrell, wed girlfriend, Sarah Maiuto, in March this year. It was a classic affair – an elegant wedding styled in pretty pastel tones (just how Sarah wanted it) – but Leigh (and photographer, Steven Murray) got to have some boy fun of their own, taking Sarah and the bridal party out to Leigh’s local BMX track on the day.

27-year-old Sarah says, “I wasn’t too sure about tramping around a BMX track in my wedding dress. But BMX is such a massive part of Leigh’s life and I’m so glad we did it. It’s great to have these photos to look back on.”

Leigh, 25, started riding as a young child, winning his first Australian title when he was just five years old and the world title not long after that. Seven world titles and 12 national championships later, in a sport that took him and his family around the world competing, Leigh retired from full-time racing to pursue a (more practical) building career. He has recently started his own building company, Leedar Constructions. Sarah praises, “I am so proud of what he has achieved. He is and always will be successful in whatever he pursues. He is such a hard worker and always puts his family and friends before himself.”

The pair got together at a 21st and four years later, Leigh would surprise Sarah with a belated Valentine’s Day getaway to Melbourne – and Phillip Island – to see the Penguin Parade. “I LOVE penguins!,” says Sarah. “We watched as they came up onto the beach at sunset. Afterward we walked along the boardwalk and the next thing I knew, a ring was in front of me and Leigh was asking me to marry him!” 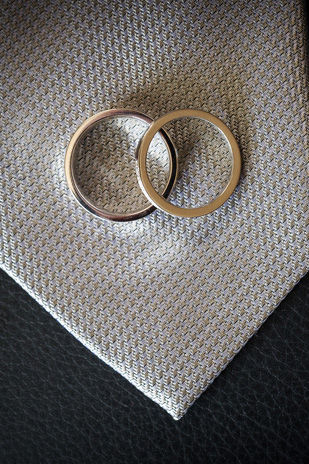 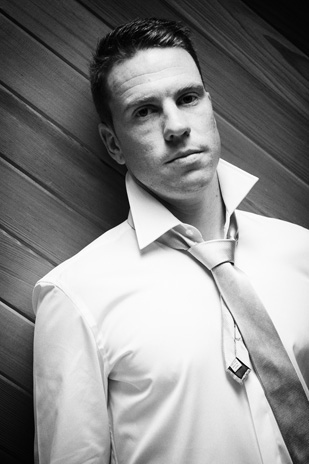 It was this Brides of Manuka mermaid ruffle gown that Sarah fell in love with, causing her to purchase it on the spot and cancel all her gown appointments in Sydney the following week. Upon the store’s suggestion, she styled the gown with an oyster coloured satin sash with crystal beaded detailing. 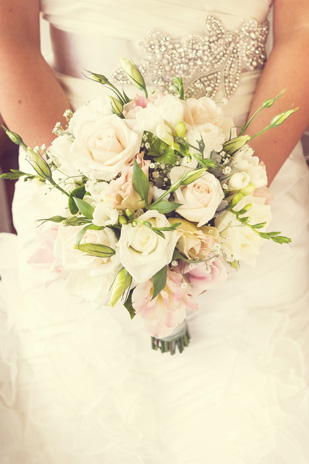 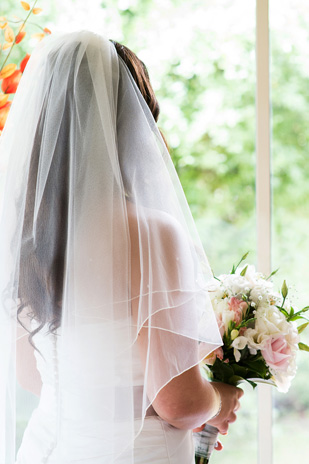 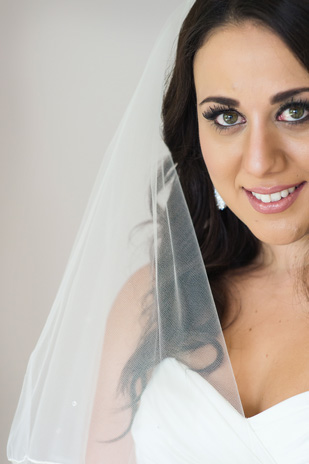 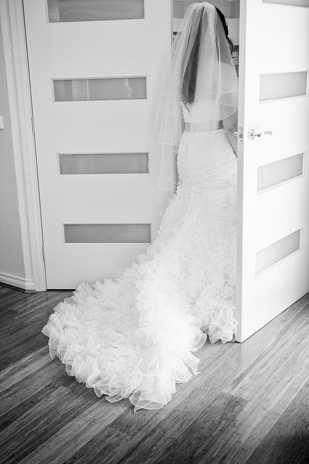 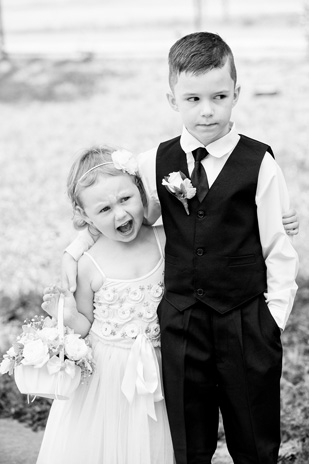 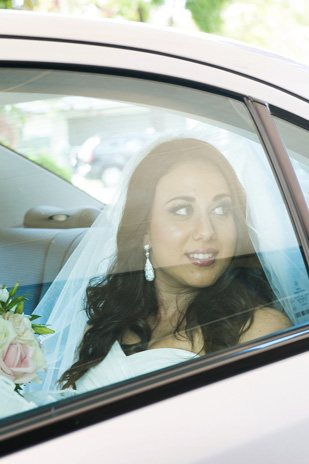 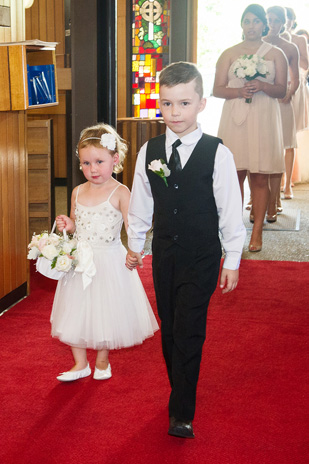 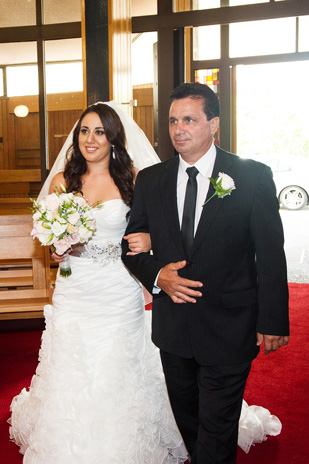 The adorable flower girl wore a white tutu dress and ballet jiffies from Tutu Du Monde whilst the pageboy wore a vest and trouser combination from Blue Sky Kids’ Wear. 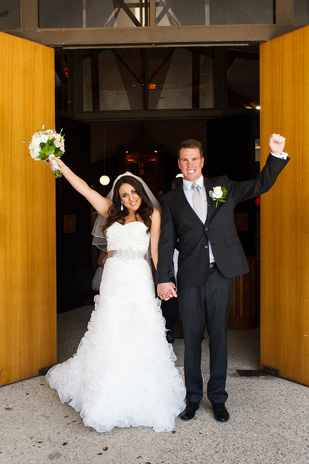 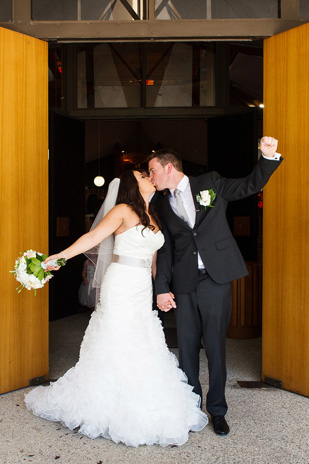 The Catholic ceremony was held at St Joseph’s parish in O’Connor, ACT with a sit-down reception for 177 guests at Hotel Realm in Canberra. 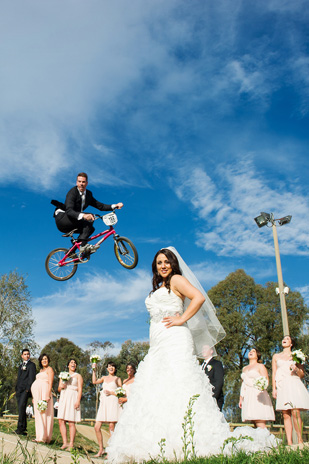 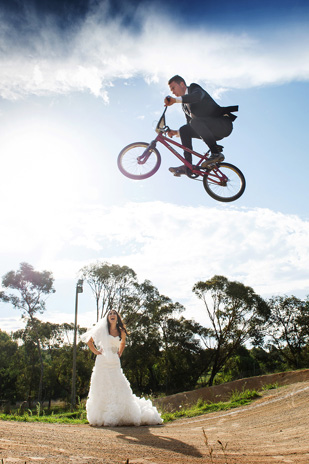 This is what I call trust. “I’ve hardly ever seen Leigh crash,” says Sarah, “so it didn’t even cross my mind that this was dangerous.” Leigh was only three feet from the bridal party as he soared over their heads on his beloved BMX. 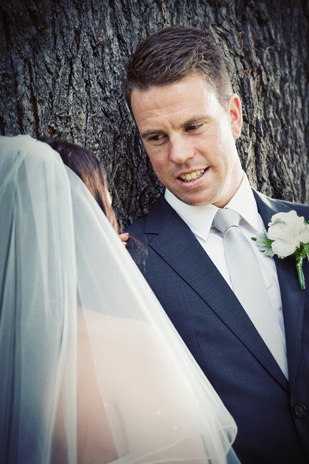 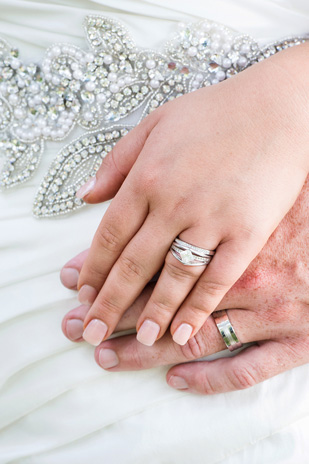 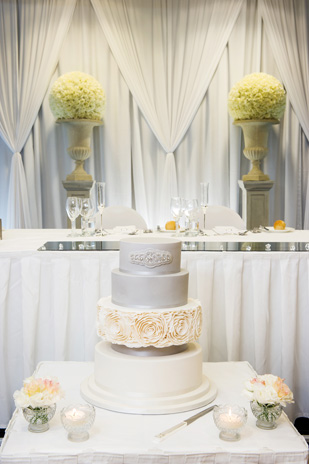 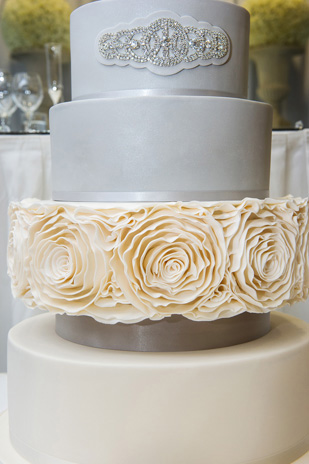 Sarah finishes with, “The best advice I got when I was planning my wedding was, the only person who can ruin your day is you.”