Both migrants to Brisbane from Iran, they were introduced by family in 2004 and for six years only ever socialised in a group. So in 2010 when Roozbeh told her of his feelings over coffee, she was taken completely by surprise. Over the next couple of months, Yalda started to look at him differently – not for the shy man she believed him to be – but  for the “honest, caring, romantic and full-of-surprises” man that he was.

On 15th December, 2010, Roozbeh proved how romantic and full of surprises he could be. He got Yalda away from the office, took her to lunch and later a walk. Preoccupied with work, Yalda didn’t even question why Roozbeh was stopping at a random house nearby. When he emerged with what she thought was a cake box, she was still none-the-wiser until she opened it up and out flew a dozen of the most gorgeous red and orange butterflies – which Roozbeh had organised through Butterfly Releases Australia. “I couldn’t breathe. I couldn’t speak. I couldn’t believe it,” says Yalda. “I didn’t even see the ring!” Crying, she could hardly answer Roozbeh’s proposal, but did so before the couple took the rest of the afternoon off to celebrate.

One year later, the pair held a modern Persian wedding of 90 guests at the historical Tattersalls Club in the heart of the Brisbane CBD. 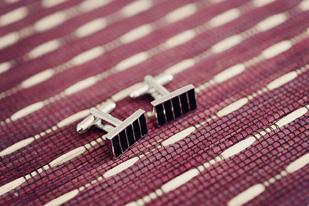 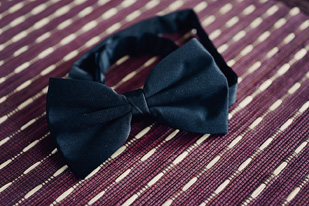 Roozbeh wore a classic tuxedo and pleated dinner shirt from John Harris Menswear, with a black bow tie which was a gift from Yalda’s sister. His best man wore a Studio Italia lounge suit and pink tie to accessorise with the maid of honour’s pink Pronovias cocktail dress. 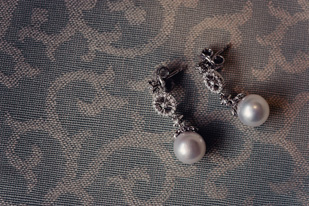 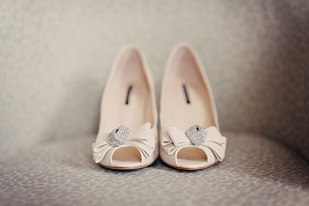 Yalda was drawn immediately to Brisbane-based designer, Fiorenza. “It was the only shop where I tried on over 10 gowns – they were all so beautiful,” says the bride. Her Sandra gown featured a beaded sweetheart bodice, A-line layered skirt with crystal and pearl edging and a long beaded train. 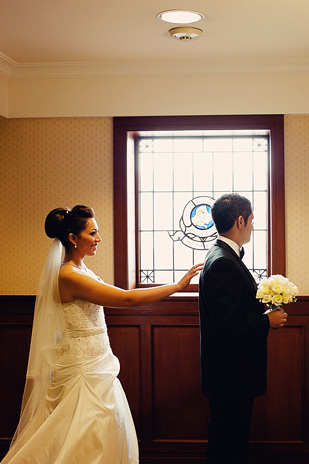 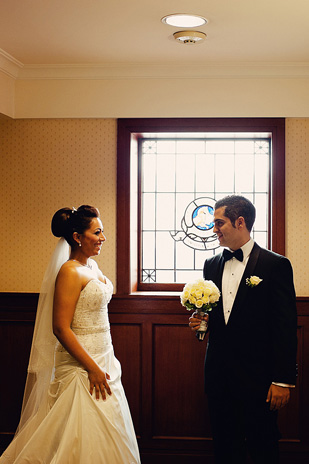 The couple had an intimate first-look prior to the ceremony before heading off for the first of their photo shoots. The grounds of Queensland University of Technology – where the Yalda and Roozbeh both earned their respective degrees in Architecture and Engineering – became an unlikely yet meaningful backdrop to the couple’s wedding photos.

All of the accessories and jewellery, including the couple’s 22 carat gold wedding bands, were purchased by the bride’s mother and Roozbeh’s parents in Iran.

The traditional Persian Sofreh, or wedding spread, was incorporated into the couple’s wedding ceremony. During the vows, the bride and groom sit before the Sofreh which includes various items of meaning, such as the mirror of fate and the heavenly fruits. When the bride removes the veil from her face, the first thing that the groom sees is her face reflected in the mirror.

During the ceremony, a selection of the bride’s closest female friends and relatives gather around the couple to hold up a decorative shawl over their heads. Two sugar cones are gently rubbed together to bestow a sweet and happy life on the newlyweds.

The second photo shoot of the day was held in and around the Brisbane CBD, and at Kangaroo Point where views of the city and river could be captured from a high vantage point. 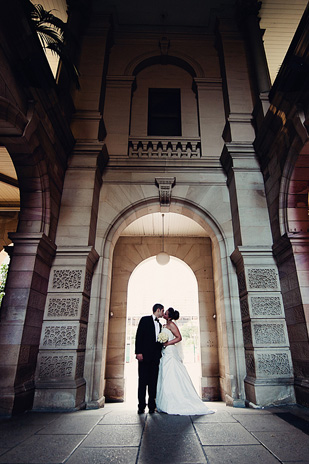 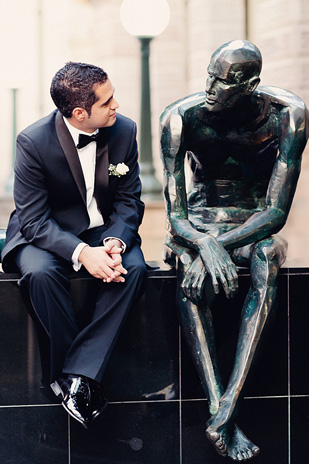 “Yalda & Roozbeh’s wedding is a supremo example of how the Persians like to celebrate,” says photographer Todd Hunter McGaw. “[It was] a non-stop dance-a-thon. The dance floor was packed solid all night. I’ve never seen anything like it.”