Just because you want to get married doesn’t always mean you can. Weddings, while fabulously exciting and fun (and a lot of work) do have a formal, very legal side to them and, if you don’t fulfill these mandatory legal requirements, you simply cannot walk down the aisle.

The legal aspects of getting married are overseen by the Attorney-General’s Department and specified in the Marriage Act 1961. It’s a Federal law that applies to all weddings conducted in Australia.

Melbourne-based celebrant David Schneider says, “The first stage of any marriage is the filling in of the Notice of Intended Marriage (NOIM), which must be completed no later than one month before the wedding and no earlier than 18 months before the wedding.”

Every couple must ensure that their celebrant (civil or religious) receives a signed NOIM no later than one month before the wedding.

The NOIM attests that you are:

– Of marriageable age (usually 18 years or older).
– Not already married to another person.
– Not closely related (e.g. you are not brother and sister).

“As long as each person is not married, that the celebrant has seen the relevant identity documents and the couple has given the correct one month’s notice, you can be married in Australia,’’ says David who has performed more than 600 wedding ceremonies in the seven years he has been a celebrant.

One thing to note, though you can marry only if you are 18 or over, there is an exception. Marriage is possible if one of you is 16 years of age or over and the other is 18 years of age or older, but you must first obtain permission from the courts.

You don’t have to be an Australian resident to marry in Australia and, unlike the case in many other countries, there are no residency requirements for a legal marriage here.

David says that as long as your NOIM is correctly filled in and delivered to your celebrant within the specified period, celebrants can marry anyone who meets the requirements.

“I’ve had couples from everywhere from Japan and Croatia to England, Ireland Russia marry here having validly completed their NOIMs which have been sent to me after being signed by an Australian embassy official in their country or a notary,” says David, one of Australia’s most popular celebrants.

While Australian marriages are recognised worldwide, if you are expecting your marriage to assist an application for migration or residency, you must seek proper legal advice before getting married.

Currently, Australian law defines marriage as “the union of two people to the exclusion of all others, voluntarily entered into for life” and, as such, same-sex couples can legally marry in Australia as of 2017! YAY! We are so so glad that love won. 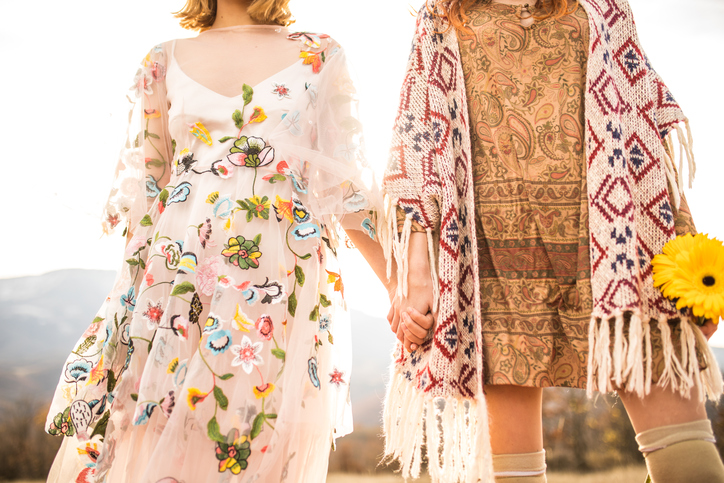 When can you get married?

The Marriage Act specifies the need for one month’s notice period before a marriage can take place. That is one full month between the time you declare officially that you intend to marry and the day that you are able to walk down the aisle together.

The intention is, of course, to reduce the number of couples who marry in haste – and repent at leisure.

Be warned, the time rules with regards to NOIMs are very strict. If your Celebrant breaks the rules and allows you to marry before the one month period expires, he/she could end up behind bars – and your marriage could be invalidated.

So, if your celebrant receives your NOIM on April 2, then you cannot marry before May 2, however, you can marry on May 2, but not before that date.

“There are only five criteria which the authorities will consider before allowing this time to be shortened,” says David, who also conducts funerals and naming ceremonies. “If, for example, a couple did not realise they had to sign a NOIM, they may still be able to marry within the one month notice period if they can show a clear and unequivocal intent to marry more than one month before the wedding date.”

This can be done by showing receipts for wedding-related bookings such as venues or entertainment that were made before the one-month period. If the intent to marry outside the one-month period is clear, there may be a possibility that the government will approve the marriage but this is not guaranteed.

On the other hand, if you have been posted abroad for your work, or someone important to your marriage is so ill they may not last until the wedding date, then you may apply for an immediate marriage but, again, this will be assessed on a case-by-case basis and is not guaranteed.

What documents do I need?

Your marriage celebrant is required to establish your date and place of birth, and your identity.

For most couples born in Australia and never previously married, all you need are your birth certificates or passports.

If you were born in Australia, your celebrant must see and note the details of your birth certificate or passport on your NOIM. There are no exceptions to this requirement.

But, don’t worry if you’ve lost one or both. Replacement Australian birth certificates and passport are relatively easy to obtain.

Your celebrant will also ask to see photo ID, usually your driver’s licence if you’ve provided your birth certificate. If you’ve supported your application with a passport, that will suffice as your photo ID.

“If you do have a non–Australian birth certificate, ensure you have an official English translation to hand to your celebrant,” adds David who books out up to two years in advance. “If you do not possess a birth certificate or a non-Australian passport because you are a refugee etc, your marriage celebrant will help you find other ways of resolving these situations.”

Not your first time?

Your Marriage celebrant is also required to establish your marital status.

At first pass, your celebrant will ask if you have been married previously. If you say “no” then that’s it! He/she will note on your NOIM that you were “Never validly married”.

If you are not truthful, you could be committing a serious offence, so don’t bend the facts or say ‘no” if you were married and divorced years ago. Answer all questions, on your forms or those asked by your celebrant truthfully.

If you have been married previously, your celebrant will want to establish how the marriage was terminated.

The three possible options for the termination of a marriage are; a dissolution (divorce), the death of your partner, or an annulment of the marriage.

If you have been divorced, you must produce your divorce orders. If you cannot prove your earlier marriage was terminated, there will be no new marriage.

Be careful with this one. Don’t plan your wedding and your divorce party on the day your divorce is promised to be granted.

Many couples have been caught out by this timing. Your divorce becomes final one month after the date the divorce is granted and no earlier.

If your spouse has unfortunately died, your celebrant will ask to see the Death Certificate.

And finally, regarding annulled marriages, a number of people may have had their marriages annulled by the Family Court. In such cases, you must produce these documents. Again, don’t get caught out, the annulment must be from the Family Court, not a religious institution.

It should also be noted that, while you won’t need all these documents on hand when you sign your NOIM, you will need to produce them before the marriage can take place.

Couples who are coming to Australia to marry must make contact with a celebrant before they arrive in Australia who will help organise their NOIM in good time for the marriage.

Are you closely related?

You cannot legally marry a close relative, although you are allowed to marry a first cousin. If you have been adopted into the same family you are not allowed to marry immediately family members.

Where can I get married?

“If you are having a civil ceremony, you can get married pretty much anywhere, at any time – even in a cave or underwater – provided your witnesses can hear your repeat your marriage vows,” says David, who has married couples on boats, beaches and even a hot air balloon.

“Of course, some places, such as public parks, require permits,” he adds, “but as far as you’re concerned, as long as the correct legal paperwork has been filled in, there are no restrictions on where you can marry.”

If you are marrying in a church or another religious institutions, be sure to ask your minister for help and advice. Although the legal requirements for marrying in a church are the same as those for a civil service, each religion goes about things differently and may have customs, traditions or rules that need to be adhered to.

For a civil ceremony, all you need is a marriage celebrant armed with the correct documents, two witnesses and your fiancé, and you are ready to go.

“There is no requirement that you even know your witnesses as long as they’re both over the age of 18 years,” says David who has been know to provide witnesses for many overseas couples heading to Australia to marry but don’t actually know anyone here.

“Marriage is a wonderful institution,” says David, “but people forget that it’s also a legal institution and there is paperwork that must be done first.

“A good celebrant will ensure that all your paperwork is done and valid, leaving you to worry about more important things, like getting on with your new life together!”