Without doubt, a potentially contentious part of any wedding revolves around the entry of the bridal party, and the position of the bridal party during the ceremony. There is the English and Scottish way, the European way and, just to confuse everyone, the American way. 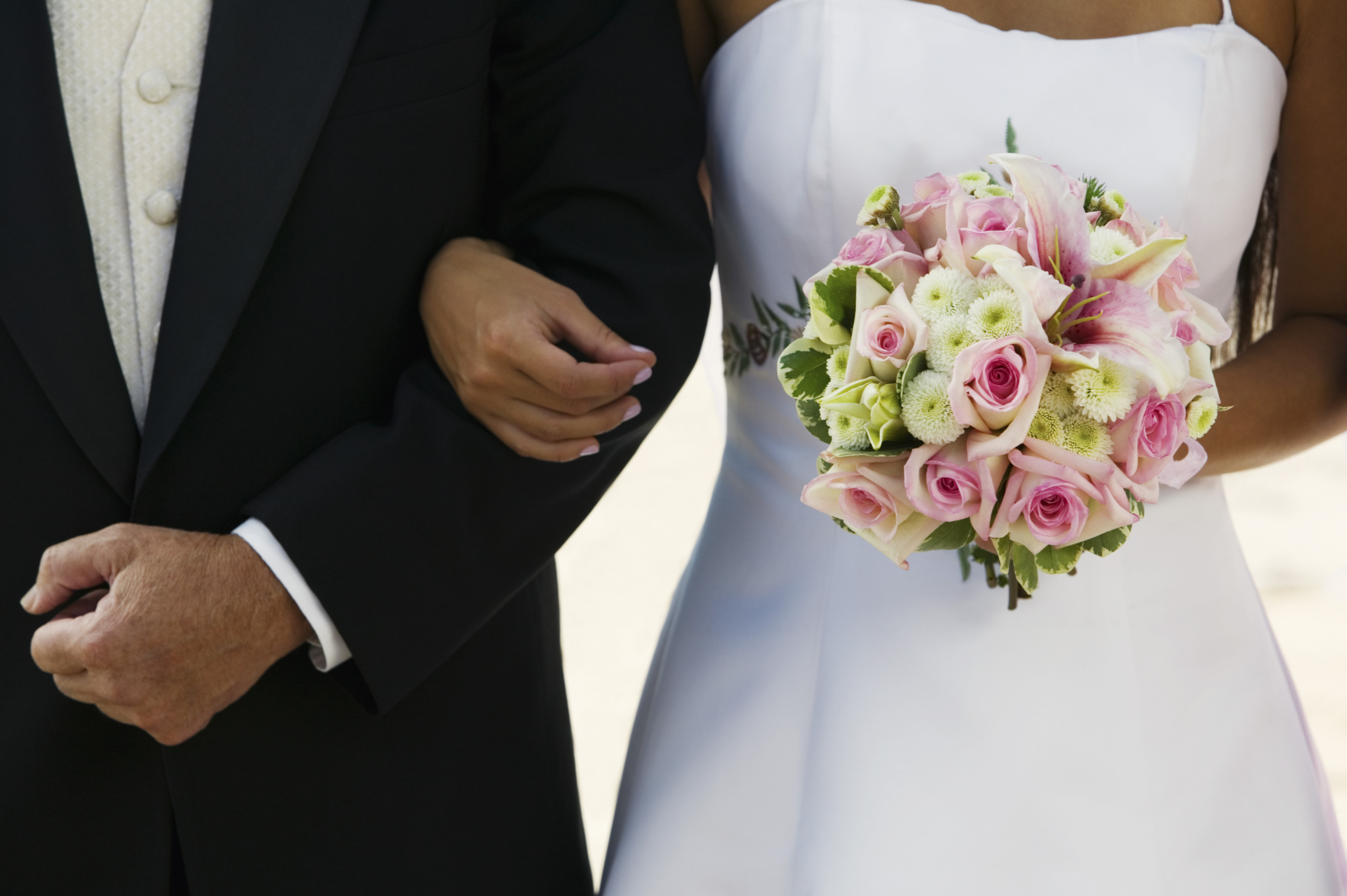 I never cease to be amazed at how many brides tell me strongly that they want the traditional way, when, in fact, they are referring to the American way rather than the British way. So, I will now attempt to bring some degree of logic and sense into the whole issue.

The question on all your lips is…. how should you enter?

The chief bridesmaid (chief attendant) is the primary member of the bride’s wedding party in a wedding. Specifically, she is the primary attendant with the most honours and duties of the bridal party, and is considered the equivalent of the groom’s best man.

The key word here is ‘attendant’, that being the person who attends to the bride. Amongst other things, the chief attendant is the person directly responsible for ensuring the bride’s train is kept OFF the ground. She generally has other attendants to assist her and SHE is in charge of them.

What, then, are the ways of entry?

Summary of the Ways of Entry

As far as I am concerned, the British (English-Scottish) way is the traditional way, since, after all, it was the English who invented pomp and circumstance. I mean, when’s the last time any one performed a ceremony better than the British?

Traditionally, English brides had only one adult attendant (as a witness). Today, it is the custom in Australia to have many bridesmaids instead of one attendant. A flower girl generally leads the way, sprinkling petals of blossoms along the isle. This signifies a happy route through life for the bride and bridegroom.

The key thing is, the bride would lead her attendants (bridesmaids) in, not the other way around. The reason is very simple, with the bride leading, her attendant(s) can then attend to her by holding up her wedding train and keeping it out of the dirt. Believe me, floorboards of churches are dirty even though supposedly swept clean.

And….. ever watched a royals marriage? Ever viewed footage of Princess, later Queen Elizabeth and Philip, the Duke of Edinburgh’s wedding? The then Princess walked in with her attendants behind her, doing exactly what they were meant to – keep her train off the ground, and what a train! What a statement, talk about the wedding being something special – it is wonderful footage to view.

In many parts of Europe, it is not unusual for couples of German and other European heritage to walk in together, especially amongst older, mature couples.

Where I have encountered significant difficulty in relationships between the bride and parents, especially where the parental relationship ended acrimoniously, I have recommended this way for entry.

Thanks to the intensive force feeding of American culture to our society by the plethora of US made movies and TV shows we consume every day of our lives, many couples have incorrectly come to regard the TV way as the traditional way.

In the American way, the bride is preceded by her attendants. The result is in some cases, a great long procession, where the bride eventually makes it to the alter.

I well remember one ceremony where this now common way of entry ended in farce as a result. The bride had a large train on her dress, which became the colour of the grass and dirt it was dragged over.

As she neared the ‘handing over’ position, her attendants all saw the mess and suddenly broke ranks and dashed to do something – too late, the whole thing was a mess. The attendants clogged that part of the procession and it all became a total farce. Had the bride followed British tradition, all would have been well and her train remained clean.

At another wedding, there were so many bridesmaids, the wedding music ran out, the fellow in charge of that couldn’t get the CD re-cued and the bride arrived to nothing. On another occasion, the music was replayed three times before the bride made it to the front!

A variation of the American Way

With the groom waiting on his own at the alter, the groomsmen meet their equivalent bridesmaid at the entrance to the church and escort her to the front. The attendants to be furthest rom the bride and groom enter first.

Lastly in is the bride and her escort, who hands (gives away) the bride to the groom. You should consider the history of the ‘giving away’ concept.

In that ancient Scottish way, every one is waiting by the roadside for you, even your groom. We all know you are coming because the piper steps out in front of your vehicle 100m down the road and pipes you the rest of the way.

On arrival, your groom steps forward and opens the car door for you. After your Dad comes around from the other side of the vehicle, you link arms with both your groom and your Dad (or Mum) as well. Then, when everyone is ready, the pipers leads off playing his bagpipes, followed by the celebrant, with you behind and everyone else following behind you

I have had brides easily adapt this format to a conventional ceremony with outstanding results.

In many Asian cultures, the bride and groom walk in together. In my Buddhist ceremonies, I would expect the bridal couple to walk in together and, in most cases, with myself leading them in.

Why is the British Way Better?

For the bride who wants to be the star of the show, she would be by following British tradition. How often do we see a wedding where there are simply too many attendants; by the time they all file in, then the bride arrives, it is all an anti-climax. With such a long entry procession, many guests are simply glad it’s all over!

However, with the flower princesses directly leading the bride in, she is be the absolute star as her attendants all fuss around behind her keeping her train off the ground and doing what they are meant to do.

Then, there is this ridiculous thing that some bride’s carry on with when using the American way, in which they expect their attendants to lead in by slow marching – slow, sliding step forward, hold a moment, then slide the other foot forward.

The military spend numerous hours drill training as professionals to get it right. Believe me, unless all of you were in the cadets at school and were trained how to do it, forget it! It looks simply stupid when rank amateurs try it.

The ideal pace to walk in at is slow, casual walking pace; simple!

Which Way Is Best?

Obviously, I have declared my hand and regard the British way as THE traditional and best way. It really does make the bride THE star!

However, the reality is, the way you want it is best. But remember one thing, if your dress has a train behind it, the best way will always be the British traditional way.

Whichever way you choose to enter, remember to ensure there is ample space between your bridesmaids and yourself. This to enable the photographer to take good photos of each of you, rather than bunched up photos because you are all too close to each other. Who can escort you in?

Sure, tradition decrees your father, but we do live in a nuclear age. Relationships are often different, sometimes posing significant difficulty for the bride.

Quite frankly, it doesn’t matter who walks you in. So, who can?

Failing all that, be different and…..
Walk in together with your groom or
Use the method used in my Scottish ceremonies and create the scene for a really happy event.

Dare to be different

I have always said that you can attend 50 Australian weddings in a row and the only thing that will change are the bridal couple and the celebrant.

Why not dare to be different? Why not enter unlike any one else you have ever seen. Why not use the village walk from my Scottish ceremony?

In that ancient Scottish way, every one is waiting by the roadside for you, even your groom. Your groom steps forward and opens the car door for you and you link arms with not just him, but your Dad (or Mum) as well. Then, when everyone is ready, the celebrant lead off with you behind and everyone else following behind you. What a fabulous entry, what an incredible way to start the ceremony and, believe me, the atmosphere of the ceremony is immediately unlike any wedding you have ever attended.

Go on, make a statement and dare to be different!

If a large wedding, the bride should appoint a trustworthy and reliable close friend to be the bride’s assistant (BA). Some ideal attributes of this special person are they should not want to seek the limelight, yet be good organisers.

This person’s task is to stand at the entry point, whether that be to the church, or elsewhere and ensure that all is in order at the entry. The BA ensures the celebrant (and the musicians) know when the start is actually occurring, then ensure that each attendant steps off at the right time to ensure correct spacing between the attendants.

If using the American entry, then if the bride’s train is all stuffed up, there is no one to ensure it is fixed up before the bride commences her journey, since the attendants, whose role is to take care of all that can’t, since they have already gone on their journey.

This is where a BA is invaluable – her role including sorting out the bridal train as the bride starts off.

As important is that the music commenced at the correct time because the BA gave the signal to the celebrant (and musicians) at the right time.

The recession is simply the exit of the bridal party.

In this case, the bride and her husband lead their attendants, with senior attendant following then down to the most junior attendant.