Bridal necklaces are central to the entire bridal outfit, so it is essential to find one that fits perfectly with the dress. With a simple or strapless gown, a statement necklace can add interest, whereas an intricately designed gown works best with a simple chain. 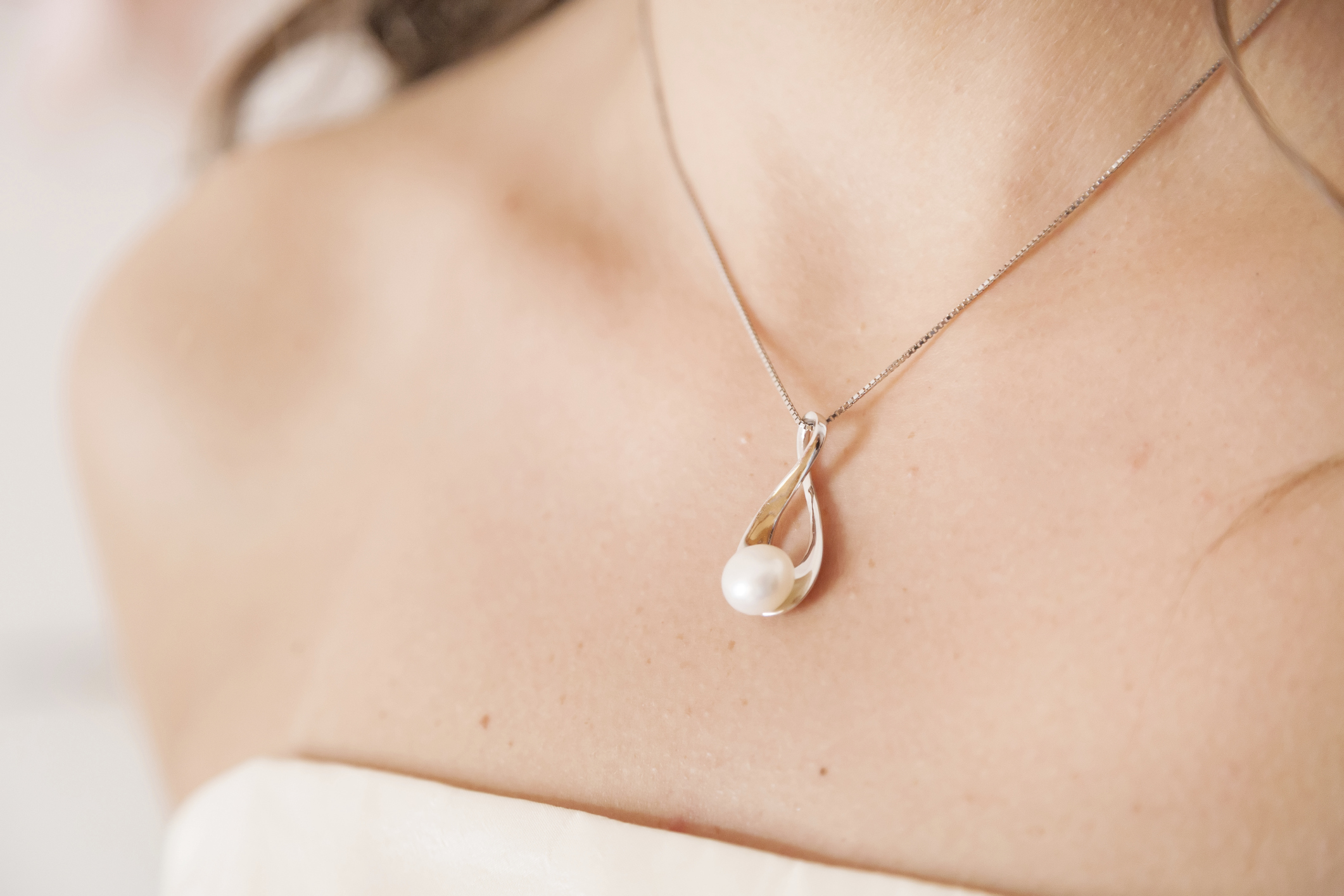 Here are ten of the more popular styles of bridal necklace.

A choker is a single strand necklace that fits snugly around the neck. It is usually between 14″ and 16″ in length and can be made from material such as ribbon or leather, or from a string of beads or pearls. The tight fit of the choker produces a round effect, and usually works well with wedding dresses with a relatively high round neckline.

A collar is similar to a choker in that it fits snuggly around the neck, but it usually consists of more than one strand, so it is wider than a choker. A classic example would be a pearl collar, which may have three strands of pearls stacked neatly one on top of the other. A collar style bridal necklace is an elegant option that accentuates a long neck. If a central ornament is added to a collar, it becomes known as a collarette.

A pendant is an ornament such as a gem stone or charm that hangs from a cord or chain around the neck. Pendants are generally longer than chokers; at least 18″. An example of a simple pendant would be a gold cross on a chain, or a drop shaped diamond gem on a silver chain which is a very popular bridal necklace.

A locket is similar to a pendant, but it features an ornament that opens up to reveal space for a photograph or object. Many brides choose to wear an antique locket as their ‘something old’ or ‘something borrowed’, and lockets can be a wonderful way to carry a picture of an absent friend with you on your wedding day.

A bib is an intricate necklace best worn with a strapless gown. It has a draped fringe effect with strings of beads or gemstones hanging down from the main necklace which is similar in style to a choker. The shape made by the fringe of beads or gemstones resembles a bib. This style of bridal necklace may also be known simply as a fringe. 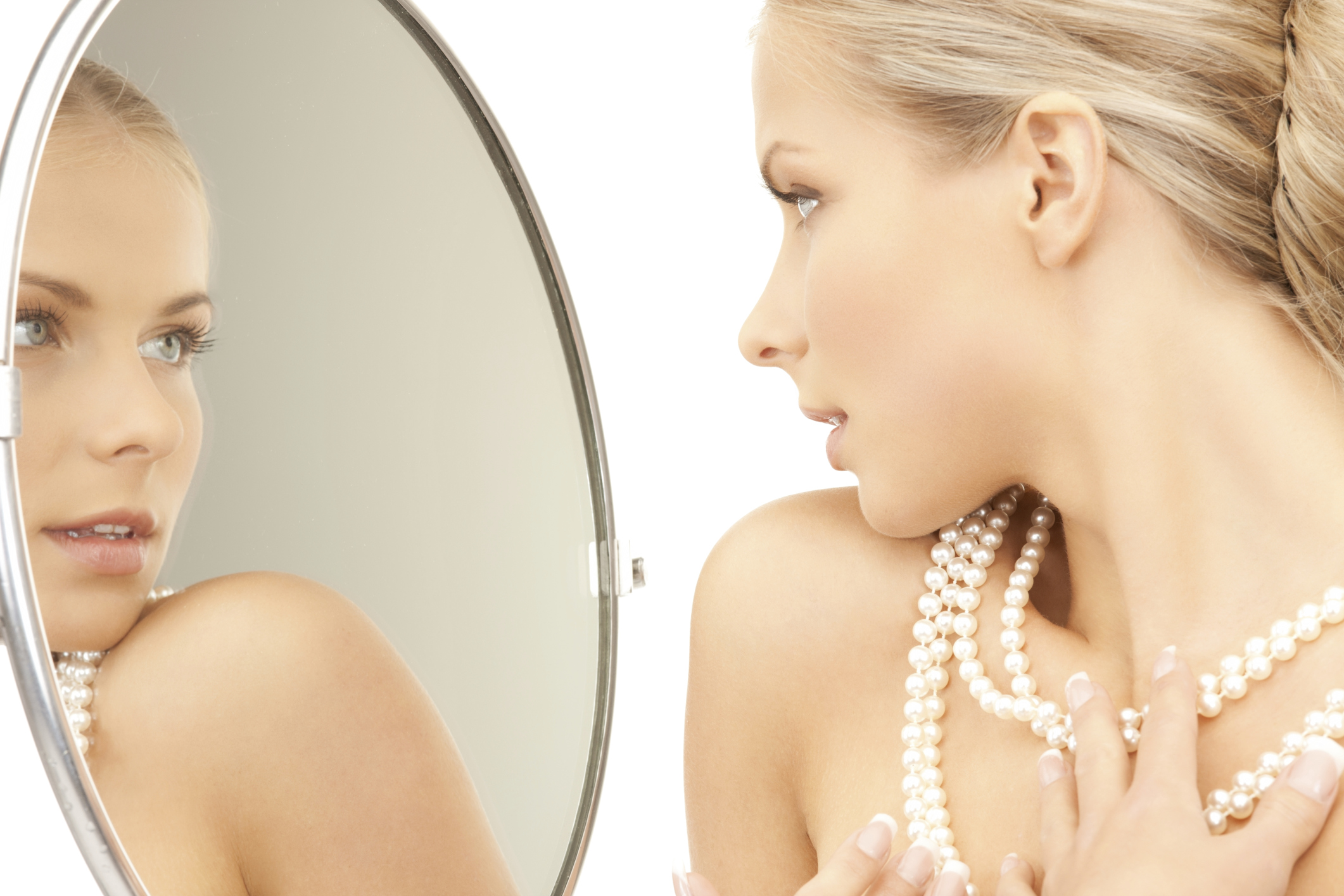 An esclavage style bridal necklace consists of a number of strings of pearls, gems, or beads, usually three strands in total. The top strand is the shortest, usually being about the length of a choker, and the strands get progressively longer so that there is a gap between each one when worn. A fashionable twist on this style is to have fine wire strands with widely spaced pearls or beads.

A Y necklace is a single strand necklace with a small chain or string of beads that hangs down at the throat forming a Y shape. This necklace is well suited to a dress with a V shaped neckline. It also looks good on curvier brides as it draws the attention down through the centre of the body which has a sliming effect.

A bolo can be made from either leather or chain. It is a necklace that fastens at the front and has a small ornament that slides up under the chin leaving the two ends dangling.

A festoon is an intricate style, usually made with strings of pearls or beads, although chains can work equally well. A festoon features a choker style strand or chain, with a number of other strands that hang from it and loop back up to meet it again, forming an elaborate pattern.